What is it with me and the BMW R11XXRS? When I first “discovered” BMW motorcycles I immediately fell in love with the R-RS model. This model has been the redheaded step child of the BMW line. Many years they are left out of the USA catalog entirely. Back in 2000 I was in the market for my first brand new BMW. The R1100RS was the bike I wanted.

But I couldn’t find one anywhere. My local dealer told me that BMW USA only imported a few dozen that year. I finally found one down in Lancaster PA, so my wife and I hooked up the trailer and drove 9 hours to pick it up. This bike had everything I was looking for in a motorcycle. Great looks, fantastic fit and finish, perfect ergonomics for me, plenty of power and that “BMW Soul” you hear about. But it surged and vibrated badly. I tried everything to resolve it, but I couldn’t get it sorted out to my satisfaction. I traded it in on a K1200RS, a simply amazing bike, but that’s another story.

Early last year I had the bug for another Oil Head and I saw a 2002 R1150RS on EBay with no reserve and few bids. I bid on it and won. This bike was better than the 02 for surging, but it still vibrated more than I wanted. I quickly found a buyer for it and moved it sideways.

But the boxer bug was still running deep. Research led me to the 2004 model year. The 2004 bikes now had dual spark heads which cured 100% of the surging and really smoothed out the motor. I couldn’t find a reasonably priced R1150RS so I settled on a R1150R-Rockster. This was a fantastic motorcycle. Everything you would expect a modern BMW motorbike to be. But it had zero wind protection and this made long distance touring a bit of a pain, especially in the rain. I recently traded it in on a BMW 650 X Challenge. Don’t ask me why, but I wanted something with a lot more ADVENTURE in its spirit. Yet again, another story!

I attended a motorcycle function a week ago. One of our club members rode in on his Blue/Silver 2004 R1150RS. I commented to one of my friends, Phil, standing nearby that if I could find a bike just like that for a reasonable price, I’d buy it. No sooner had I said it, Phil’s I-Phone goes of with a notificaton that an ad has been posted on the IBMW classified web site. Phil is a serious collector and always looking for a deal. The ad was for a 2004 R1150RSL in Blue/Silver. 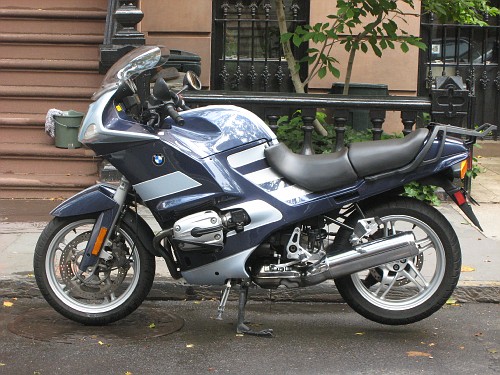 Can you believe it! And it was only three hours away in Brooklyn NY.

I called the owner and made arrangements to go down and look at it on the following Tuesday. The bike was in great shape. 16K miles, full service records, complete set of luggage including the top box with back rest. The real kicker was that this bike was an “L” version. This means it had the lower body panels. These were not imported into USA and to get this look you needed to purchase the panels seperatly at a cost appoaching $2000!

The bike needed tires, but other than that looked fine. The price was extremely good. I paid for it and loaded it into the trailer. Phil was with me and we proceeded to Long Island to look at five bikes Phil was interested in. He ended up buying an airhead Cafe Racer for parts and passed on the rest. Yet again……..another story!

So, I’m on my third R11XXRS. I’m really liking this bike. Smooth, no surging, fast, 6 speed transmission make the twisties a bit more fun. I installed new tires (see article about Shinko tires) and I’ll do the 16K maintenance this week……and then ride the snot out of it.