A friend and I were riding down to Alabama from Massachusetts to attend the invitational  “Handgun Only Hunt” that White Oak Plantation has hosted for a couple of years. I attended solo last year and wanted to return, and I got my friend Paul invited.

So with 20 hours of driving ahead of us, what do you think we talk about?….GUNS! (and a little bit of hunting)

We started discussing the “what if you could only have one rifle” topic. And the next thing you know, we are designing the ultimate, perfect rifle…….

We decided on a few criteria….. Remington had recently introduced the Model 700 in Titanium. Although for hunting rifles, I much prefer Winchester Model 70 Classic actions. But since this rifle would be a switch barrel and be used for everything from Prairie Dogs to Moose, a Remington action would give us better accuracy with the smaller calibers. And the selection of benchrest quality triggers gave the nod to Remington.
A few phone calls and we found a pair of used Remington 700Ti rifles up at Kittery Trading Post in Maine. When we returned from Alabama we packed up a few “horse trading” rifles and headed for Maine.
With the rifles in hand (they were both 270 Winchester, not a bad cartridge for one of the switch barrels), we had previously decided on a cartridge. Since we are both Ackley nuts, the 257 Roberts Ackley got the green light. An order was sent off for a reamer, brass and dies.
THE BARREL A couple of barrel blanks were ordered from Pac Nor, 3 groove in #3 Contour. Now a #3 contour is a pretty heavy barrel if you are looking for light weight, but with the Kevlar stock and the Ti action, I was  sure we would still come in under 7 pounds when it was all said and done. And the heavier barrel would be better in the varmint fields if longer range shooting was called for. Kreiger and PacNor have been my barrels of choice lately. They just plain ship great product, no reason to go anywhere else.
The rifle will have two aftermarket barrels and the factory takeoff. The aftermarket barrels will be in 257 Roberts Ackley and 35 Whelen. The factory take off as mentioned previously is the 270 Winchester.

In my estimation, a rifle lives and dies by its trigger. For this project I chose a Kipplinger “Single Set” trigger. With the trigger in the normal mode the let off is 2.5 pounds, in the “set” mode it a featherweight 6 oz. With a bipod or off a shooting rest, that 6 oz let off is beautiful. 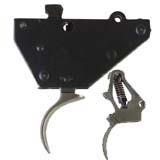 For the rifle stock we stayed with the factory Remington Kevlar with Aluminum bedding block. I’m not sure who makes this stock for Remington, but it’s a beauty. And it weighs near nothing.
SCOPE AND RINGS

Currently the rifle is wearing a Bushnell 5-14X Elite “Fire Fly”. This scope is unique in that simply shining a flashlight down the tube illuminates the reticle and causes it to glow for a couple of hours. No batteries and extra weight, but you still get an illuminated reticle. In the Prairie Dog towns it will wear a Weaver V-24 with Varmint Reticle. A bit more magnification and a range reticle for far off shooting. (Note: Because I suffer from MSS (Multiple Scope Syndrome) and I’ve never met a scope I didn’t want to buy and try, this rifle has worn dozens of scopes. From a 4X Weaver Gran Slam to its current Burris 3-9XX 40 30mm Euro with a lighted reticle….Which BTW is the best hunting scope I’ve ever owned….PERIOD!  So it will have two scopes mounted and sighted for the proper load. The Burris for “woods” hunting and the Weaver V24 for longer range varmint work))
The rings are the lightest and most sturdy available. S&K Kontoured rings and mounts. Beautifully made with no projections to snag and rock solid without damaging the scope tube. An added feature is both the front and rear ring at windage adjustable. Nice! Muzzle brakes are controvercial. I know, I’ve been next to them in a hunting situation without ear protection. Not good! But we wanted a brake to see the shot on Coyotes and other varmints. So I went with the Brockman “On-Off” muzzle brake. A quick twist and the brake is turned off………..The guides will love it! Muzzle brake with KG GunKote
The FINAL FINISH
I was on a deer hunt in Montana a few years ago and a buddy of mine had just bought a new stainless steel rifle. One morning he was across the field from me and I was shocked at how his rifle barrel looked like a Star Wars Light Sword! Every movement he made was a flash of light from 300 yards away……..The Ti and stainless finish just won’t do. I’ve been using KG GunKote on pistols for years. Amazing stuff. Extremely durable and looks great too. I coated the whole rifle, bolt, brake, everything with this product. Before the finish on the bolt and rails, the bolt actually felt like it was gauling. The bolt now feels like it is on rails.I’ve had this rifle on a Canada Caribou hunt in the worst conditions you could imagine, and not a spec of rust or corosion. So there it is…..If you can only own one rifle. This just could be it!
I’ve named it the “VAC Rifle”
Varmint – Antelope – Caribou
But now with the addition of the 35 Whelen barrel, maybe it should be called the
“VACEBM Rifle”
Varmint-Antelope-Caribou-Elk-Bear-Moose

This web site is part of my income stream. If this article was helpful
to you, you might want to throw a few bucks at me via paypal
rvb100@comcast.net

Not necessary, but certainly appreciated!

If you have any questions, I can always be reached at  rvb100@comcast.net